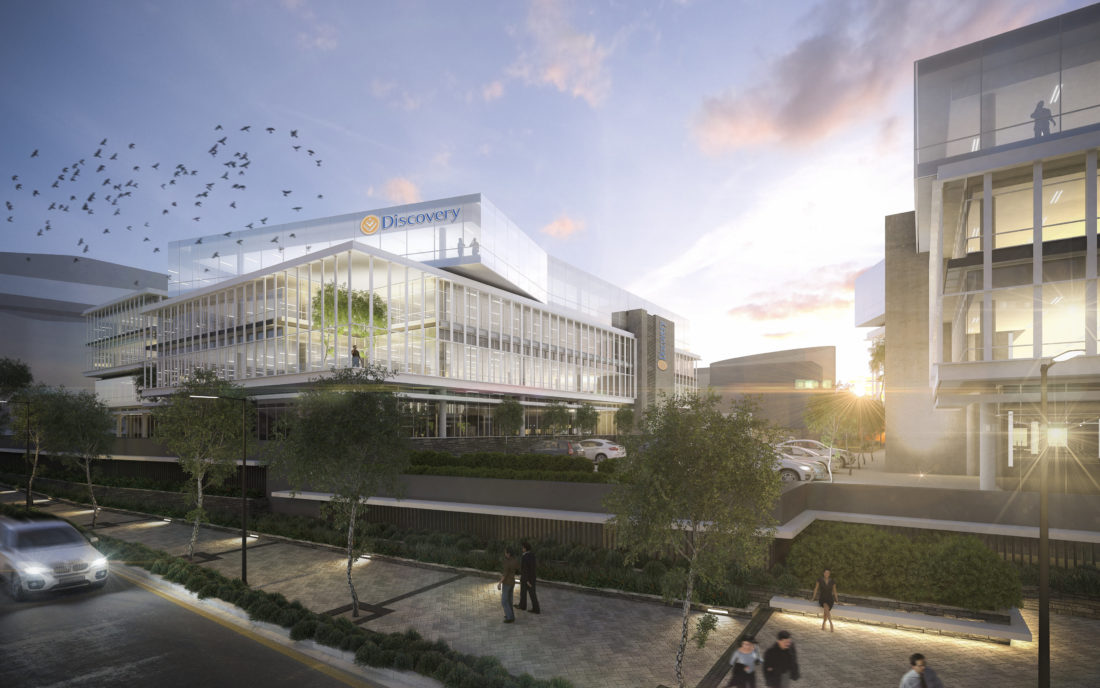 Being developed by the Rabie Property Group at a cost of R460million, Sable Park will comprise two four storey buildings of 8 000 square metres and 8 300 square metres respectively, each with two levels of underground parking.

Designed in a contemporary modern vernacular by the award-winning dhk Architects, the buildings will front on to Sable Road providing high visibility and offering uninterrupted panoramic views of Table Mountain and Table Bay.

Discovery’s Cape Town staff, who will be relocating from elsewhere at Century City due to their existing lease expiring, will be occupying the larger of the two buildings.

The second building, which is ideally suited for a large user looking to make a strong corporate statement, is being designed to be flexible and if needs be, could be sub-divided to accommodate smaller users, says Rabie director, Colin Anderson.

David Pierre-Eugene, head of Group Facilities at Discovery, said: “With our existing leasing commitments coming up for renewal, we were on the look out for new premises whereby we could be consolidated into one building and have options for future growth.

“As part of our assessment for new premises, we surveyed other developments outside of Century City and found that from a location, convenience and amenities point of view, Century City was still the best location to meet our requirements.”

Sable Park is situated in the all-green Bridgeways precinct which has become the new commercial and hospitality hub of Century City. The precinct is home to a number of other blue chip companies including the new Absa regional offices, Chevron, Philip Morris, the Business Centre, Thomson Reuters, Mastercard, Derivco, Northfund, Glad Africa and the Rabie Property Group amongst others.

Also located in the precinct is the mixed-use Century City Square which comprises the Century City Conference Centre and Hotel, 15 000 square metres of offices, 51 apartments and five restaurants, pubs and coffee shops surrounding a public square and served by 1330 parking bays in a super basement and a structured parking garage.

Century City Square development was recently awarded a 4-Star Green Star – Custom Mixed Use Design rating by the Green Building Council of South Africa, the first development in the Western Cape to achieve this.

Five other office buildings in the precinct have also received Green Star ratings.

Anderson said Sable Park was also being designed as a green development and it was their intention to register it with the GBCSA, aiming for a 4-Star Green Star rating in both the Design v1 and As Built v1 categories.

The Bridgeways precinct also boasts a Virgin Active gym and is in easy walking distance of convenience retailing, spas, three other hotels and the Canal Walk Shopping Centre.