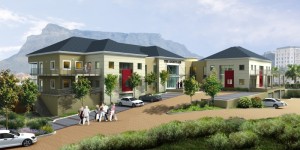 An artist impression of The Courtyard to be built at Central Park, Century City

A new block of prime sectional title offices is to be built at Century City at a cost of R37 million to meet pent-up demand for small to medium size offices in the precinct.

The launch of The Courtyard follows the successful sell out of the Gatehouse sectional title office block at Century City where 17 of the 23 units were sold to investors and all were let within six months at gross rentals of between R125 – R135 a square metre.

Giles Balmer of developers, Rabie Property Group, said in the past six months they had built up a waiting list of investors and owner occupiers wishing to purchase sectional title offices in the precinct and already six of the 18 units had been spoken for. Four of these, he said, were owner occupiers.

Prices excluding VAT but including parking and installation allowances, average around R16,750 per square metre.  Parking will be provided at a ratio of 3,5 bays per 100 square metres with 14 additional visitor bays being provided. Owners and tenants requiring additional parking can make use of Century City’s monthly e-parking facility which in time will fall on the shuttle bus route around Century City from e-parking.

Designed by Moren Williams Lotter Architects, this will be the 10th building to be built in Central Park, which has been designed as the focal recreational hub for the greater Century City precinct and is also home to a multi-purpose sports field, a Clubhouse, a community square, the offices of the Century City Property Owners’ Association, and a large daycare centre.

Balmer said it was an ideal time for owner occupiers to purchase as interest rates were historically low.  “There is also no other competing sectional title stock for sale that is being built at Century City or anywhere else at the moment.  It is also an ideal time for investors to buy as not only is money relatively cheap but there is a shortage of 100 square metre to 200 square metre units to rent in Century City.”

Construction of the building by Big Ben Construction will begin within the next six weeks with anticipated completion and transfer scheduled for August 2012.