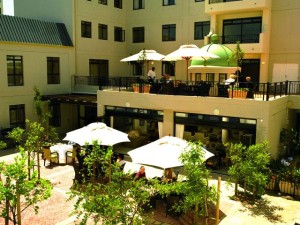 The courtyard at Oasis

The Oasis Care Centre, which forms part of the Oasis Luxury Retirement Resort at Century City where a third apartment block is currently under construction, has had its license upgraded from a Sub-acute to a Physical Rehabilitation discipline.

Lizzie Brill, General Manager of the Oasis Care Centre, which also offers hotel-style assisted living, frail care and a specialised Alzheimer/Dementia unit, said they had a multi-disciplinary team that was well equipped to deal with patients requiring treatment once they were discharged from hospital following surgery or a medical trauma such as a stroke.

“The team comprises a medical doctor, an occupational therapist, a physiotherapist,  a  neuro-physiotherapist, a language and speech therapist as well as highly qualified Nursing Staff who together provide outcome based treatment for patients in these circumstances.  All in all we have a staff complement of around 100.

“We aim to get the patient as functional as possible taking a baseline from how they were prior to the medical trauma or surgery and working at getting them back to the same  level of functioning or better.”

Brill said the Physical Rehabilitation facility also has a Practice Number issued by the  Board of Health Funders of SA  (BHFSA) that enables patients to be admitted under Medical Aid authority for varying lengths of time, dependant on the surgery or trauma and the progress of the patient.

The Care Centre was also one of the first facilities in the Western Cape to obtain a Mental Health licence for its Alzheimer’s & Dementia wing, and is a leader in its field.

She said the Oasis Care Centre also worked very closely with the Department of Health who had used their facility to assist with establishing core standards for the planned National Health Insurance.

“The Department of Health is to be commended for the regular and rigorous inspection process that they follow, thereby ensuring   high standards in the best interests of patients.”

While residents in the Oasis Luxury Retirement Resort received priority admission to the Care Centre, demand for their services was coming from all over, she said.

In terms of their various licences they can accommodate up to 25 Medical Aid patients in the rehabilitation/frail care facility and 40 in their Alzheimer’s & Dementia wing.  In addition they have Assisted Living Units for those that are still fairly active but just require an hour or so of assistance per day in bathing, dressing and taking their medication.

Owen Futuran, a  director of the Oasis Joint Venture which includes the Rabie Property Group and which is developing the third sectional title apartment block, Palm Royale, in the resort said few if any other retirement complexes offered such state of the art facilities and services right on their doorstep.

“While the vast majority of our purchasers at Oasis do not currently require the services offered by the Care Centre it provides peace of mind to them knowing it is available if needs be down the line.”

Construction of Palm Royale, which follows the successful sell out of the first two phases, is currently underway and scheduled for completion in the first half of 2014.

The R255million, 11 storey block comprises 58 two and three bedroom apartments ranging in size from 110 square metres to 237 square metres and priced from R2,45million to R8million. Sales to date total around R100million.