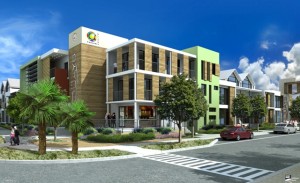 Artist impression of Quays Commercial to be built at Century City

The Quays, an exciting new boutique commercial development providing smaller office users the opportunity to purchase in Century City is to be launched by the Rabie Property Group.

The development will comprise 39 low rise studio offices ranging from 41m2 to 228m2 , excluding balconies,  and priced from around R800 000, ex VAT. Occupation is scheduled for early 2014.

Rabie director John Chapman says as such it represents a unique and ideal opportunity for both investors and smaller owner occupiers looking for an affordable entry into commercial property ownership at Century City.

“It would be ideal for service providers or professionals such as doctors, dentists, financial advisers and the like.”

Chapman said the Quays had really been tailored to meet the needs of these two categories of buyers – owner occupiers and investors – for whom price had previously been an economic barrier to commercial property investment at Century City.

“Through clever design and capitalising on the tail end of the relatively low construction price cycle we have been able to develop an affordable commercial investment product that is comparably priced with our entry level residential developments in the precinct. We expect this will have a special appeal to those investors who have previously limited their portfolio to residential investments due to price considerations.”

Chapman said the low rise offices will be set around courtyards and a water-fronting piazza on to which a bistro restaurant will flow.

The two and three storey office buildings with basement parking for tenants and podium parking for visitors – 140 bays in all – have been designed as individual facades rather than a monolithic office block and the varying architecture will give the appearance of a village street edge that has evolved over time. The buildings will be serviced by a lift. There are also a limited number of opportunities for ancillary retailing with street frontage and a few dual work and loft living opportunities.

The Quays is the commercial component and final phase of a mixed use development and follows the successful launch of the Quayside and Quaynorth residential elements.

“An added advantage is that it will link into Century City Connect, the open access Fibre-to-the-Premises network which offers access to the country’s fastest voice and broadband services as well as multi-media connections,” said Chapman.

Construction is scheduled to get underway in early 2013 with occupation expected in March/April 2014.

For more info go to www.thequays.cc