Quayside at Century City sold out ahead of completion 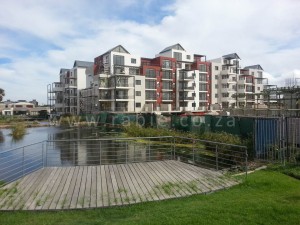 The 63 apartment Quayside development at Century City, which is being developed by Rabie Property Group and financed by Nedbank Corporate Property Finance, has been sold out three months ahead of transfer.

According to Brian Usher, Sales Manager of Property World, the on-site official agents, this is the first time a residential development has been sold out at Century City ahead of completion for more than five years and was indicative of both  the market strengthening  and the continued strong demand for homes within the burgeoning precinct.

Usher said Property World has sold a  total of 100 residential properties at Century City since July 2012.  Of these,  43 were new development sales totalling just under R100million and the balance were resales totalling just over R82million giving a total value of R179million. In addition, a further  R100million in sales had been notched  up at the Oasis Luxury Retirement Resort in Century City over this period.

“While Property World’s sales this year have been  lower than they  were at the same time last year, 2012 figures were  influenced by the launch of two new projects during that period whereas  we have only launched one new project so far this year – Waterberry at Ashton Park where we have already sold 15 of the 43 one, two and three bedroom apartments since its launch in late February.

“We expect these sales to continue picking up particularly due to its location close to the new Curro Private School and we are already planning the next two phases of Ashton Park which at this rate we will be launching in the second half of the calendar  year to keep up with demand,” he said.

Usher said that buy-to- let  investors were still very much in the market due to low interest rates and the strong demand for residential apartments from tenants .  “In fact as soon as an apartment becomes available to let we are able to fill it and we have a long waiting list of would be tenants.”

He said the shortage of rental stock had seen rentals firming considerably in the past couple of years.  “We are now achieving between R6500 and R7500 for a one bedroom unit, around R9000 for a two bedroom unit and up to R13 000 for a three bedroom unit.”