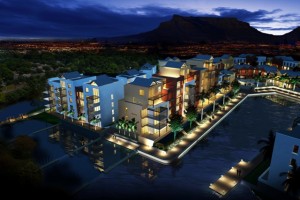 An artist impression of Quayside at Century City

Quayside, a new residential development at Century City comprising 63 apartments including six semi-detached homes, is to be launched on November 10 to meet the burgeoning demand for waterside living in the precinct.

Being developed by Rabie Property Group at a total cost of around R95million, Quayside is the first large development to be launched at Century City this year and is being brought about because there is little or no developer stock left in earlier developments.

The one, two and three bedroom apartments units will range in size from around 50 square metres to around 150 square metres excluding balconies, while prices are expected to be in the order of just under R1million to just under R3million. One bedroom units will each have one parking bay and two and three beds, two parking bays and some even garages.

Project manager, Miguel Rodrigues, says extensive planning has gone into the development with many of the strongest selling factors of previous developments being incorporated into the design including
all apartments and duplexes being water fronting with balconies and most are north-facing.

“And very importantly,  Quayside  will be centrally located within Century City, adjacent to the award winning Waterstone development and in easy walking access of many of Century City’s amenities including Canal Walk shopping centre, Intaka Island nature reserve and the Century City Clubhouse and sports Oval,” says Rodrigues.

Designed by Chris Bam Architects in a modern contemporary vernacular, Quayside will also link into Century City Connect, the open access Fibre-to-the-Premises network which will offer residents access to the country’s fastest voice and broadband services as well as multi-media connections in the country.

Century City Connect, is “carrier neutral” which means residents will not be tied in or forced to use any specific voice or Internet Service Provider (ISP). Rather they will have a choice of a number of pre-selected blue-chip ISPs to choose from that will be hosting their services in a purposely built Century City Connect Data Centre.

Rodrigues said other innovative amenities within the development include a central hot water system which will not only save space in each apartment but also be more energy and cost efficient than individual geysers in each apartment. This should, he said, also reduce the household insurance payable by the body corporate, and help eliminate resultant damage caused by burst geysers.

Construction of Quayside is expected to start early in 2012 with completion and transfers scheduled for mid 2013. Big Ben, the contractors on Rabie’s Waterstone development, which was voted top residential development in South Africa in 2011 by the South African Property Owners’ Association, have been appointed to construct Quayside.

Quayside will form part of a larger development which comprises three independent erven – Quays which will provide 3500 square metres of low rise studio offices set around courtyards and Quaynorth, a smaller residential complex of around 28 apartments.

Two showhouses are currently under construction and will be available for viewing from early next year while a model of the development will be on show at Rabie’s onsite sales centre from early November.