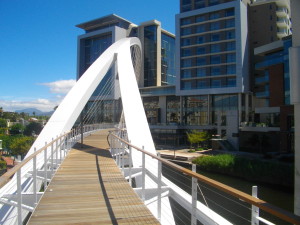 Town & Country Projects and Vivid Architects have won the 2010 Gold Award from the Institute of Timber Frame Builders Association for the Crystal Towers bridge which links the mega Crystal Towers development to Canal Walk Shopping Centre at Century City. This is the second gold award Town & Country Projects and Vivid Architects have picked up for timber work at Crystal Towers which was developed by the Rabie Property Group. The previous year they won gold from the Institute for the construction of an external boardwalk and five jetties. This is in fact the third consecutive award Town and Country Projects has won for Rabie Property Group projects since 2007 when Town and Country Projects received a bronze award for an external boardwalk at Bougain Villas residential development at Century City which also received a SAPOA Award for Excellence as the top residential development in South Africa in 2009. The state-of-the-art Crystal Towers Bridge is the fifth bridge spanning the Grand Canal to be built at Century City providing pedestrian links between the north and south banks. The 86m bridge links the Canal Walk precinct directly with the “internal street’ of Crystal Towers, which comprises a five star 180 room African Pride hotel and spa, 91 luxury apartments and 7000 square metres of Triple A grade offices. The internal street, on to which a number of restaurants spill, is in turn a major pedestrian arterial route between the Crystal Towers precinct and the planned Bridgeways Precinct at Century City.