Sinenjongo High School in Joe Slovo Park has maintained its meteoric turnaround of recent years achieving a 93% pass rate in the 2013 matric examinations with the school’s top matriculant, Sinombongo Macekiswayo achieving 6 distinctions, four of which were above 90%!

The 93% pass rate is virtually unchanged from last year’s 94%.

Of the 91 matriculants who wrote this  year, 85 passed outright and three of those that failed have qualified to write supplementary examinations. It is a far cry from the measly 27% pass rate of six years ago when there were less than half the number of matriculants and before corporate sponsors starting partnering with the school it a major drive to turn it around.

For Sinombongo Macekiswayo, who turns 19 today (Tues 7 Jan) it was a double celebration and the tears of joy did not stop flowing as teachers and learners hugged her in congratulations. Sinombongo, who has been provisionally accepted to study medicine at the University of Cape Town this year, achieved 94% for mathematics, 92% for Geography and Life Orientation, 91% for Life Sciences, 89% for Physical Science, 88% for English First Additional Language, 77% for isiXhosa Home Language and 73% for Maths Paper 3.

This is the first year that any Sinenjongo learners have written the optional Maths paper 3 and  Sinombongo and two other strong maths students prepared for it in the mornings before school started with the help of their maths teachers Mrs Monica Lloyd. Another success story is that of 20 year old Lethukuthula Moyo who had to drop out of matric in 2012 with drug resistant XDR TB.  She returned in 2013 and through hard work and determination not only passed all her seven subjects but achieved a B-aggregate. Lethukuthula plans on studying nursing at UWC this year. The number of Sinenjongo learners achieving Bachelor passes enabling them to go on to study at university totalled 30 while 39 achieved a Diploma pass enabling them to go onto study a diploma course at tertiary level. All in all there were 28 subject distinctions in Maths, Science, Business Studies, English First Additional Language, Life Sciences, Geography, Economics.

The school was adopted  by the Rabie Property Group as the major beneficiary of its   Social Investment programme five years ago and they, together with other  sponsors, including the Platteklip Charity Challenge, Ratanga Junction and the Mackay Family Foundation, fund the salaries of  five additional teachers  and various programmes at the school aimed at increasing maths, science and English proficiency. 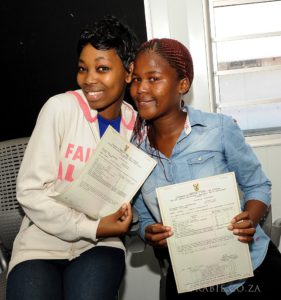 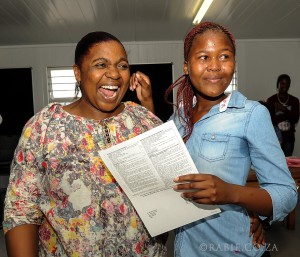 Tears streaming down her face, Sinombongo Macekiswayo, Sinenjongo’s top student for 2013 who achieved six distinctions including four above 90%, is congratulated by principal Mrs Khuleswa Nopote.