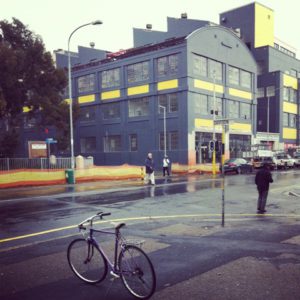 Three neighbouring industrial buildings in Albert Road Woodstock are being redeveloped into a trendy, upmarket mixed-use complex to be known as The Woodstock Exchange.

The three buildings were acquired late last year at a cost of R20,5million by Dormell Properties which was also behind the redevelopment of the hugely popular Old Biscuit Mill which is close by. The redevelopment, which is costing a further R17million, will result in a total GLA of around 11 420 square metres and a combination of studio, retail and office space.

Barry Harlen of Dormell Properties said the development comprised two front buildings which were joined to form the front block with the third block positioned behind this.  The front block comprises five floors while the back building consists of a basement level, which is mostly parking, and six more floors.  He said in terms of the redevelopment, they had demolished internal walls to open up the light well and had installed glass shopfronts to let in as much light in as possible.

“We are striving to create a community type feel to the development and there will be art installations throughout, an area to lock up bicycles, showers for those who cycle to work, great communal areas for tenants to share, an ATM, restaurants, coffee shop and the like so that it will be a great place for like minded, creative tenants to work and share their ideas,’ he said.

Nicola Villarini, portfolio executive of Rabie Property Administrators (RPA) which has been appointed to manage the development, said that when completed, The Woodstock Exchange would house a total of around 60 tenants many of which are from IT or creative industries.

“In fact we are almost fully let with just one unit remaining.”  She said many of the units were studios with an average size of around 130 square metres and had been let for around R45 per square metre.  “While many of the previous tenants have been retained and the redevelopment has taken place around them, the owners have also secured some great new tenants including Bandwidth Barn, Google and Pedersen & Lennard, among many others”.

Villarini said they were very excited about the new development which would be the tenth building in the Indigo/Dormell property portfolio that RPA had been appointed to manage.

Harlen said the redevelopment was due to be completed by year end.  “A lot of credit must go to Projectmen and Greg Beadle who have project managed the development of the building. They have put in tremendous work, with tight deadlines, to make this possible,” he said.