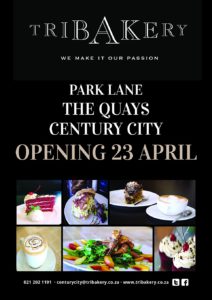 An exciting new eatery is opening shortly in the Quays, our vibrant, new mixed use development in Century City.

This trendy neighbourhood restaurant is based on the concept of a combined bakery and restaurant that produces delicious freshly baked goods as well as serving breakfast, lunch and dinner and everything from simple food to three course meals.

Modelled on Tri Be Ca in New York, TriBakery was launched in 2009 by Ryan New with the first store opening in Kalk Bay aiming to provide Capetonians with a slice of the Big Apple.

Cape Town lapped it up and the popular chain has now grown to 12 outlets scattered around the Peninsula from Noordhoek to Kuilsriver.

The Century City TriBakery which officially opens on 23 April will trade from 7am until 9pm seven days a week.

The Quays comprises 39 low rise studio offices in two and three storey buildings set around courtyards and a water fronting piazza which is home to TriBakery. The buildings have been designed as individual facades  rather than a monolithic office block with the varying architecture and colour scheme giving the appearance of a village street edge that has evolved over time.

The intimate scale of Quays embraces both the neighbouring Quayside and Quaynorth residential developments – where all 91 apartments were sold before completion – as well as the Waterstone residential node.

For further details on TriBakery send an email at centurycity@tribakery.co.za