This past Saturday was Valedictory Day at Sinenjongo High School in Joe Slovo Park, Milnerton, which Rabie adopted as the major beneficiary of its Corporate Social Responsibility programme five years ago. 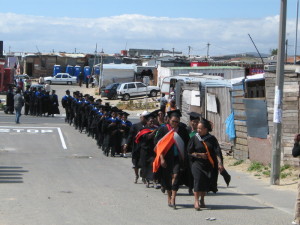 What a day it was and what a long way the school has come since we initially got involved! 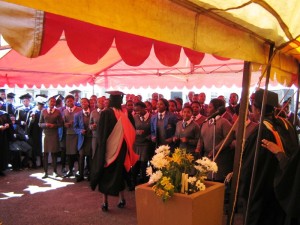 Ahead of proceedings starting, the 87 matriculants, decked in academic gowns and mortarboards, were proudly paraded through the township by some of the staff for a lap of honour while the parents, Grade 11s, the remainder of the teachers and VIP guests waited patiently, half in the baking sun and the luckier half under cover of a tent, for the proceedings to begin. 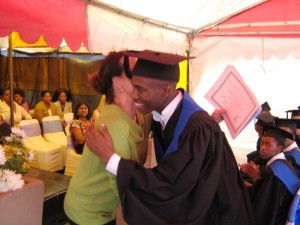 Preparations for the event had begun at the crack of dawn on Saturday. Up went the tents, the sound system, the red carpet was laid and the chairs were bedecked in white cloth with blue chiffon bows.  Flower arrangements and candles were the final touches transforming the normally bleak school yard into a mini paradise while classrooms groaned with food and beverages to be enjoyed after the festivities. 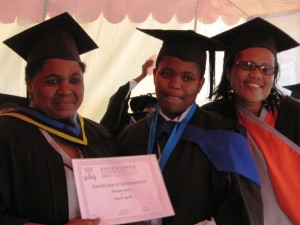 The ceremonial festivities  were extremely moving not least of which was the newly reconstituted choir which is no doubt destined for great things and whose renditions included a praise song for Ms Nopote, the inspirational new principal who is spearheading the tremendous transformation of Sinenjongo into a centre of excellence. This bought learners, teachers and parents to their feet in unison.

There were also a number of motivational speakers including the top learner of 2010 who is one of the first 13 Sinenjongo learners to have gone onto a tertiary educational facility. 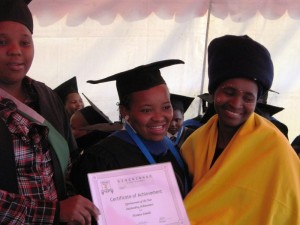 As can be expected from a school determined to succeed, the celebration of academic, leadership and sports achievements was the high on the agenda. The top learner for 2011 was Lukhanyo Velelo who it is hoped will be Sinenjongo’s first but most certainly not last A average matric student.

His runner up was Thembisa Monki, while Pamela Sigodlo received the Principal’s award for her exceptional contribution to the school and the community. 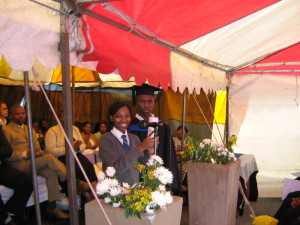 Certificates for the top learner, the runner up and the mostimproved in each subject were given out to deafening applause from other learners and with proud parents rushing up to hug and congratulate their offspring and to be included in the excitement and photo record. 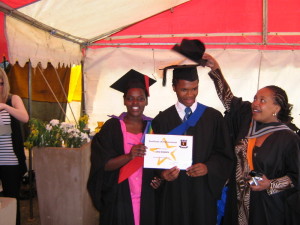 While it might have started off two hours late, there is no doubt the Valedictory Service on Saturday was exceptional and the spirit among learners, teachers and parents was the stuff of goose-bumps.  One can’t believe this is the same school of a few years back. It is chalk and cheese.  From the kids to the teachers to the parents to the community there is real ownership of the school, of their future and of their path to success.  We wish the matriculants the very best in their exams. We are so proud of you all!