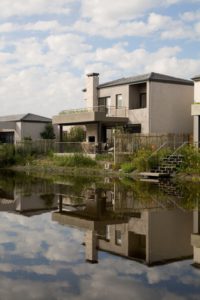 Is it on the water? That is the first question potential residential buyers at Century City tend to ask, says Miguel Rodrigues, project manager of Rabie Property Group.

Rodrigues says there was no doubt that water-fronting properties were the most popular units for which buyers were willing to pay a premium.  “There is something very appealing about water. Not only is it aesthetically pleasing but it imbues a sense of calmness and tranquility and in many cases also provides a soft and natural security barrier.”

Century City has a 8km network of navigable canals which not only form part of the precinct’s storm water management system but also provide recreational opportunities, particularly in terms of canoeing, stand-up paddling and dragon boat racing.

At the heart of Century City is Intaka Island, a 16ha nature conservation wetlands area that is rich in birdlife and indigenous flora.  Half of the reserve consists of seasonal pans that are dry in summer but fill up in winter while the other 8ha is a reconstructed wetlands area which act as a natural purification system for the water in the canals.

Rodrigues said Rabie had spent millions extending the waterways at Century City to create water fronting residential developments. These had included Waterstone Isles – 54 free-standing luxury homes on an exclusive man-made island with many of the homes also overlooking Intaka Island nature reserve. Only a handful of these homes which are priced from R3,5m to around R5,5m remain to be sold.

“Our Waterstone East and West developments, where two thirds of the 182 apartments and 13 townhouses are waterfronting, is now sold out and sales have also gone strongly in our most recent development, Little Moorings, where over 80% of 42 apartments including the 33 which face onto water, have been sold,” he said.

He said they were finalising plans for a new residential development at Century City to meet the continued demand for waterfronting properties in the precinct. All 60 or so units in the development, priced from just under R1million to around R3million, would be water fronting, and many of them also north-facing with balconies.

“We have no doubt that this new development which we will be launching on November 10 is set to become the benchmark in chic waterside living!”