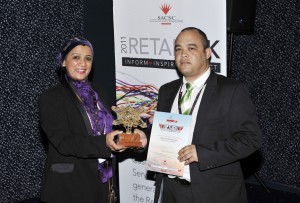 Faizah Behardin of the Cape Chapter of the South African Council of Shopping Centres (SACSA) presents the award for top regional supermarket retailer to Garron Van Rensburg, manager of the Woolworths Foodstore at Palmyra Junction.

The South African Council of Shopping Centres initiated the Special Star Awards seven years ago to create a platform to honour and recognise those retailers and service providers who have provided an exceptional level of customer service and who have contributed to the success of the shopping centre industry.

Woolworths food, the anchor tenant at Palmyra Junction, beat three other finalists to clinch the regional Special Star award for a supermarket in the Retail category. The other finalists were Super Spar in Vangate Mall; Pick n Pay in Canal Walk and Superspar in Edgemead Village centre.

Palmyra Junction Shopping Centre, which was developed by Rabie Property Group, opened in October last year. The 1200 square metre Woolworths foodstore – one of the largest standalone Woolworths food stores in the Western Cape – was designed to be the “greenest” of all Woolworths Foodstores countrywide. Green building measures implemented include the recycling of energy for the under floor heating, rain water harvesting and natural ventilation.

Situated on bustling Palmyra Road, the shopping centre is fully let and enjoys plentiful parking with about 150 dedicated bays provided on site.

Congratulating Woolworths food on a fantastic achievement, Janet Wishnia, portfolio manager for Rabie Property Administrators which manage the centre, said Palmyra Junction generally and Woolworths in particularly had outperformed all expectations in  their first year of trading.  “The public response to the shopping centre and Woolworths has been very positive and both have certainly succeeding in changing shopping patterns in the Southern Suburb.”

Glenn Gilzean, Woolworths Group Director, Retail Operations said he was delighted that their Palmyra Junction store had won this award.   “We are encouraged by the recognition and will continue to focus on balancing our concern for the environment and local communities alongside the demands of our retail operations.”